The Ju 388 was a development of the Ju 188, which based on the well-known Ju 88. Consequently, the first plane, the Ju 388 L-0 V 7, PG+YA, c/n 300001, was built from a Ju 188 E/F and came to fly in December 1943, even before the first actual prototypes, V 1 to V 6, could be completed. Wings and tail wing were taken from the Ju 188 without modification, the landing gear originated from the Ju 88. In contrast to the Ju 188, the Ju 388 was equipped with a pressurised cabin and was designed as a high-altitude aircraft. In order to maximize the aircraft's velocity, the aircraft was hardly armed. At its tail, there was a remote control gun turret with two MG 131. While wing de-icing was done with hot air from the engines, there was a separate, fuel driven Kärcher heater to de-ice the elevators. There were three versions, Ju 388 J (night fighter), Ju 388 L (reconnaissance) and Ju 388 K (bomber). Unfortunately, the latter is not treated in the manual of January 1945.

This page is mainly dedicated to the Ju 388 L, because one aircraft survived in the depot of the National Air & Space Museum. It is the plane with the serial number 560 049, a Ju 388 L-1, which was manufactured at Weserflug's Liegnitz/Silesia plant. Parts of the fuselage were made by ATG and Niedersächsische Metallwerke Brinckman & Mergell (Hamburg-Harburg). The aircraft was captured by US troops in Merseburg at the end of the war and then shipped to the USA aboard the HMS Reaper with other valuable German aircraft (Operation Sea Horse) for detailed evaluation tests. These were conducted at Wright Field, Ohio. The aircraft bore the marking FE-4010 (later T2-4010). The aircraft was also on display at the Dayton air show. In 1947, after the tests had been finished, the Ju 388 was donated to the Smithsonian Institution. In contrast to other German aircraft, the Ju 388's cockpit is almost in its original state. And this is how the cockpit looks today: 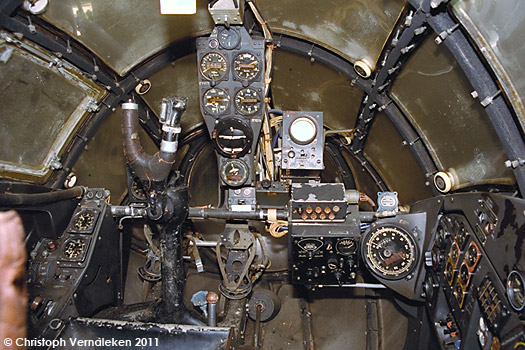 * Störtebeker, born in Wismar, was a famous German pirate of the Middle Ages. He was rather popular because people regarded him as being a kind of avenger of the poor. When Stockholm was under siege in the late 14th century, his pirate organisation supplied the city with food they had stolen from merchant ships of the wealthy Hanse trade organization. Störtebeker was eventually captured and executed in Hamburg in 1401.

Further, authoritative information on the Junkers Ju 388 can be found in our Junkers Ju 388 book, which was published with Aviatic in 2003 (in German) and appeared in an English edition 2006, which you can order here.

In case you want to link to this page, fee free to use the above banner I created for this purpose! Please, use http://Ju388.de only!

© 24.08.2015 by Dr. Christoph Vernaleken. This article may not be published - as whole or in excerpts - in any form without written permission of the author