As most of you know, Martin Handig and I worked on a book on the Junkers Ju 388 for many years, which was then originally published under  the German title "Junkers Ju 388 - Entwicklung, Erprobung und Fertigung des letzten Junkers-Höhenflugzeugs" with Aviatic-Verlag (December 2003). This very detailed documentation on development, flight testing and production of the Junkers Ju 388 is now also available in an English edition by Schiffer Publishing (July 2006) at $69.95 in a very good translation by David Johnston titled

This edition features 408 pages and more than 380 b/w and colour photographs, tables and graphs. For the first time, the roughly 30 prototypes (both planned & actually completed) are described in detail. There are also chapters dedicated to production and flight testing & evaluation by the Luftwaffe. Chapters on e.g. the aero engines used, competitive Luftwaffe aircraft and negotiations for a license production in Japan round up the picture. Last but not least, an annex containing an exhaustive WNr. list proves that some 75 aircraft were completed, with many more airframes in advanced production states. If you are interested to learn more about the Ju 388, you can order the book at Amazon.com by clicking here or on the book cover. 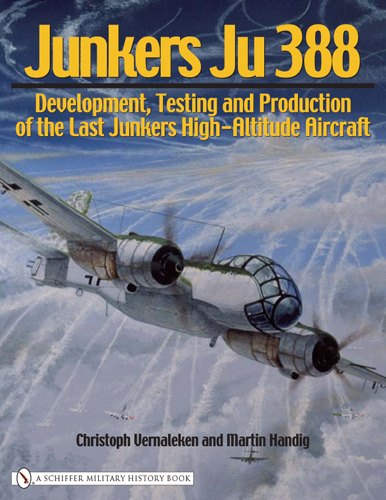 ... contains a wealth of detail seldom seen in any other title. It is the first book I have come across which goes into such detail regarding flight testing and technical development within the Luftwaffe...
--- Lynn Ritger, Scale Aviation Modeller, October 2006

Compared to the original German edition, there are no new photos, but the existing ones are printed somewhat larger and on glossy paper in the English edition, while semi-glossy paper is used for the German edition.
The main difference to the German edition is that the English edition features a limited amount of additional or updated material in the text and the references, reflecting the progress we made on the subject in the last three years, and we would like to thank Schiffer Publishing for the opportunity to incorporate these changes in the English edition, rendering it more than a mere translation, almost a 2nd edition. However, the main reason for the increase from 381 to 408 pages are the larger photos.

Of course, the original German edition is still available. Its main advantage is the better layout, particularly evident for the tables. And, of course, as a Luftwaffe enthusiast, you might consider learning German - here is another good reason: 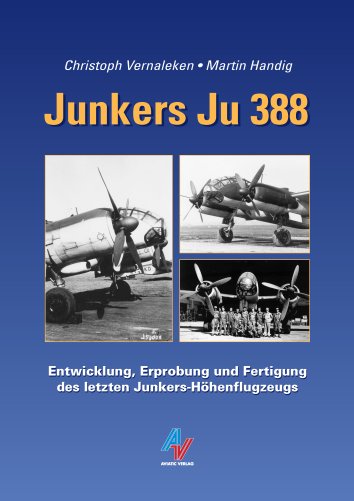 Click on the cover to order the book via Amazon.de

Back to main page...